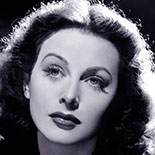 After an early film career in Germany, Lamarr moved to Hollywood at the initiation of MGM head, Louis B. Mayer, where she soon became a star during MGM’s “Golden Age.” Max Reinhardt, who directed her in Berlin, called her the “most beautiful woman in Europe,” having “strikingly dark exotic looks,” a sentiment widely shared by her audiences and critics. She garnered a degree of fame and notoriety after starring in the Czech director Gustav Machatý’s Ecstasy, a 1933 film which featured closeups of her acting during orgasm in one scene, as well as full frontal nude shots of her in another scene. Her most popular success was as the biblical temptress Delilah in Cecil B. DeMille’s Samson and Delilah (1949).

Lamarr was also notable as co-inventor, with composer George Antheil, of an early technique for spread spectrum communications and frequency hopping, which paved the way for today’s wireless communications and which, upon its invention in 1941, was deemed so vital to national defense that government officials would not allow publication of its details. At the Electronic Frontier Foundation’s Sixth Pioneer Awards in 1997, she and George Antheil were honored with special awards for their “trail-blazing development of a technology that has become a key component of wireless data systems.”