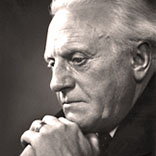 Lagerkvist wrote poems, plays, novels, stories, and essays of considerable expressive power and influence from his early 20s to his late 70s. One of his central themes was the fundamental question of good and evil, which he examined through such figures as Barabbas, the man who was freed instead of Jesus, and Ahasuerus, the Wandering Jew. As a moralist, he used religious motifs and figures from the Christian tradition without following the doctrines of the church.

THE BOAT OF LIFE
Par Lagerkvist

Soon you’ll be dead and not know you are gliding
upon life’s boat away towards the other lands
where morning waits for you on hidden shores.

Don’t be afraid. Fear not the hour of parting.
A friendly hand calmly trims
the boat’s sail
that takes you from the
evening land to that of day.
Walk without apprehension
in the shore’s silence
down the soft path through the
twilight grass.

The god who does not exist,
he it is who enkindles my soul,
who makes my soul into a wilderness,
a reeking ground, a scorched land,
reeking after a fire,
Because he does not exist.

He it is who saved my soul
by making it a desert and scorched,
The god who does not exist, the awesome god.
It is not god who loves us, it is we who love him,
who reach out for him in longing
after something else,
someone greater than ourselves,
as love does.

And our longing becomes
the more intense the less it is returned,
our despair the deeper
the more we realize that we are deserted,
that we are loved by no one.

What is deeper than absences,
than unreturned love?
If you believe in god
and no god exists
then your belief
is an even greater wonder.

Then it is really something
inconceivably great.
Why should a being lie down
there in the darkness
crying to someone who does not exist?

Why should that be?
There is no one who hears
when someone cries in the darkness.
But why does that cry exist?