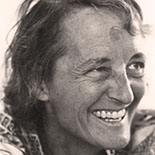 Elisabeth Kübler-Ross, M.D. (July 8, 1926 – August 24, 2004) was a Swiss American psychiatrist, a pioneer in near-death studies and the author of the groundbreaking book On Death and Dying (1969), where she first discussed her theory of the five stages of grief.

She is a 2007 inductee into the American National Women’s Hall of Fame. She was the recipient of twenty honorary degrees and by July 1982 had taught, in her estimation, 125,000 students in death and dying courses in colleges, seminaries, medical schools, hospitals, and social-work institutions. In 1970, she delivered the The Ingersoll Lectures on Human Immortality at Harvard University, on the theme, On Death and Dying.

In 1977 she persuaded her husband to buy forty acres of land in Escondido, California, near San Diego, where she founded “Shanti Nilaya” (Home of Peace). She intended it as a healing center for the dying and their families. She was also a co-founder of the American Holistic Medical Association.

One of her greatest wishes was her plan to build a hospice for infants and children infected with HIV to give them a last home where they could live until their death, inspired by the aid-project of British doctor Cicely Saunders. In 1985 she attempted to do this in Virginia, but local residents feared the possibility of infection and blocked the necessary re-zoning. In 1994, she lost her house and possessions to an arson fire that is suspected to have been set by opponents of her AIDS work.

She conducted many workshops on AIDS in different parts of the world. In 1990 she moved the Healing Center to her own farm in Head Waters, Virginia, to reduce her extensive traveling.