After spending many years working as director of an orphanage in Warsaw, he refused freedom and stayed with his orphans when the institution was sent from the Ghetto to the Treblinka extermination camp, during the Grossaktion Warsaw of 1942. 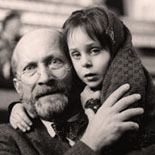 In 1907–1908 Korczak went to study in Berlin. While working for the Orphan’s Society in 1909 he met Stefania Wilczyńska, his future closest associate. In 1911–1912 he became a director of Dom Sierot in Warsaw, the orphanage of his own design for Jewish children. He took Wilczyńska as his assistant. There he formed a kind-of-a-republic for children with its own small parliament, court, and a newspaper. He reduced his other duties as a doctor. Some of his descriptions of the summer camp for Jewish children in this period and subsequently, were later published in his Fragmenty Utworów and have been translated into English.

In 1926 Korczak arranged for the children of the Dom Sierot to begin their own newspaper, the Mały Przegląd (Little Review), as a weekly attachment to the daily Polish-Jewish Newspaper Nasz Przegląd (Our Review). In these years, his secretary was the noted Polish novelist Igor Newerly. 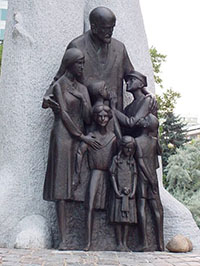 During the 1930s he had his own radio program where he promoted and popularized the rights of children. In 1933 he was awarded the Silver Cross of the Polonia Restituta. Between 1934–36 Korczak traveled every year to Mandate Palestine and visited its kibbutzim, which led to some anti-semitic commentaries in the Polish press. Additionally, it spurred his estrangement with the non-Jewish orphanage he had also been working for. Still, he refused to move to Palestine even when Stefania Wilczyńska went to live there in 1938. She returned to Poland in May 1939, unable to fit in, and resumed her role of the Headmistress.

In 1939, when World War II erupted, Korczak volunteered for duty in the Polish Army but was refused due to his age. He witnessed the Wehrmacht takeover of Warsaw. When the Germans created the Warsaw Ghetto in 1940, his orphanage was forced to move from its building, Dom Sierot at Krochmalna 92 to the Ghetto (first to Chłodna 33 and later to Sienna 16 / Śliska 9). Korczak moved in with them. In July, Janusz Korczak decided that the children in the orphanage should put on Rabindranath Tagore’s play, The Post Office.

On August 5, 1942, German soldiers came to collect the 192 orphans, and about one dozen staff members, to transport them to Treblinka extermination camp. Korczak had been offered sanctuary on the “Aryan side” by Żegota but turned it down repeatedly, saying that he could not abandon his children. On August 5 he again refused offers of sanctuary, insisting that he would go with the children. He stayed with the children all the way until the end.

The children were dressed in their best clothes, and each carried a blue knapsack and a favorite book or toy. Joshua Perle, an eyewitness, described the procession of Korczak and the children through the ghetto to the Umschlagplatz (deportation point to the death camps):

Janusz Korczak was marching, his head bent forward, holding the hand of a child, without a hat, a leather belt around his waist, and wearing high boots. A few nurses were followed by two hundred children, dressed in clean and meticulously cared for clothes, as they were being carried to the altar. — Joshua Perle,  Holocaust Chronicles

According to a popular legend, when the group of orphans finally reached the Umschlagplatz, an SS officer recognized Korczak as the author of one of his favorite children’s books and offered to help him escape. By another version, the officer was acting officially, as the Nazi authorities had in mind some kind of “special treatment” for Korczak (some prominent Jews with international reputations got sent to Theresienstadt). Whatever the offer, Korczak once again refused. He boarded the trains with the children and was never heard from again. Korczak’s evacuation from the Ghetto is also mentioned in Władysław Szpilman’s book The Pianist:

He told the orphans they were going out in to the country, so they ought to be cheerful. At last they would be able to exchange the horrible suffocating city walls for meadows of flowers, streams where they could bathe, woods full of berries and mushrooms. He told them to wear their best clothes, and so they came out into the yard, two by two, nicely dressed and in a happy mood. The little column was led by an SS man… — Władysław Szpilman,  The Pianist

Some time after, there were rumors that the trains had been diverted and that Korczak and the children had survived. There was, however, no basis to these stories. Most likely, Korczak, along with Wilczyńska and most of the children, was killed in a gas chamber upon their arrival at Treblinka. A differing account of Korczak’s departure is given in Mary Berg’s Warsaw Ghetto diary:

Dr. Janusz Korczak’s children’s home is empty now. A few days ago we all stood at the window and watched the Germans surround the houses. Rows of children, holding each other by their little hands, began to walk out of the doorway. There were tiny tots of two or three years among them, while the oldest ones were perhaps thirteen. Each child carried the little bundle in his hand. — Mary Berg,  The Diary

There is a cenotaph for him at the Okopowa Street Jewish Cemetery in Warsaw, with a monumental sculpture of Korczak leading his children to the trains. Created originally by Mieczysław Smorczewski in 1982, the monument was recast in bronze in 2002. The original was re-erected at the boarding school for children with special needs in Borzęciczki, which is named after Janusz Korczak.