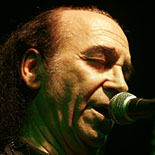 He is widely acclaimed as being the first person to ever play rock and roll in Turkey; in 1957, he and his band gained fame by playing covers of Elvis Presley and Fats Domino. He was also one of the first Turkish musicians to embrace the electric guitar and modern amplification.

By the late 1960s, he was already a major figure in Turkish psychedelic music and Anatolian Rock, beginning with his first psychedelic single Anma Arkadaş in 1967. Koray followed this with a number of singles, both by himself and in collaboration with others, that established him as a force to be reckoned with on the Turkish rock scene. Koray became a controversial figure in Turkey during the 1960s and 1970s; he was actually assaulted in Istanbul, and on one occasion stabbed, for having long hair.

In the early 1970s, he formed the group Ter with the former members of Grup Bunalim (Turkish for “Group Depression”), a power trio styled group. Although they only recorded one single before breaking up, Hor Görme Garibi (a cover of the major Arabesque music hit by Orhan Gencebay) was a smash hit, furthering Koray’s career. The music of Ter was influenced by fuzz rock and psychedelia, and featured extended guitar solos and progressive arrangements – something that the record company was not prepared to accept.

The Turkish public remained interested in Koray’s solo work nonetheless, and in 1973 his first album, Erkin Koray, was released. Up to this point, all of Koray’s work had been issued only on 45 rpm records, although he had been recording for the past 10 years and was a very popular artist in Turkey. The album consists of a collection of singles from 1967 to 1973. Koray left Istanbul Records after the release of the album.

In 1974, Erkin Koray signed to Doglan Records and released what is probably his best-known and best-selling single, Şaşkın (Dabke). Set to a traditional Egyptian tune, the single proved Koray to be an ingenious musician and arranger.

1974 also saw the release of his groundbreaking album, Elektronik Türküler (“Electronic Ballads”). Finally given the freedom to record an album instead of being limited to 45 rpm singles, Koray and his band created an album that reflected both his Turkish roots and his love of psychedelic and progressive rock. The album’s popularity continues to the present day, with several legitimate and non-legitimate releases on both album and CD. Elektronik Türküler is widely considered to be Koray’s masterpiece by many critics, and many of his subsequent releases followed in this vein, with progressive and psychedelic influences balanced by Turkish folk forms.

Koray continues to record and perform in Turkey to this day, and in Turkish music circles is often referred to as Erkin Baba (“Erkin the Father”) for his pioneering influence on Turkish popular music.