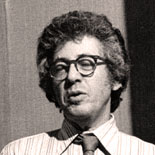 He was a prominent poet of the New York School of poetry, a loose group of poets including Frank O’Hara and John Ashbery that eschewed contemporary introspective poetry in favor of an exuberant, cosmopolitan style that drew major inspiration from travel, painting, and music.

One day the Nouns were clustered in the street.
An Adjective walked by, with her dark beauty.
The Nouns were struck, moved, changed.
The next day a Verb drove up, and created the Sentence.

Each Sentence says one thing—for example, “Although it was a dark rainy
day when the Adjective walked by, I shall remember the pure and sweet
expression on her face until the day I perish from the green, effective
earth.”
Or, “Will you please close the window, Andrew?”
Or, for example, “Thank you, the pink pot of flowers on the window sill
has changed color recently to a light yellow, due to the heat from the
boiler factory which exists nearby.”

In the springtime the Sentences and the Nouns lay silently on the grass.
A lonely Conjunction here and there would call, “And! But!”
But the Adjective did not emerge.

As the Adjective is lost in the sentence,
So I am lost in your eyes, ears, nose, and throat—
You have enchanted me with a single kiss
Which can never be undone
Until the destruction of language.

You are always the member of a team,
Accompanied by a question–
If this is the way the world ends, is it really going to?
No. Are you a Buddhist? Maybe. A monsoon? Yes.
I have been delighted by you even in the basement
When asking if I could have some coal lumps and the answer was yes.
Yes to the finality of the brightness
And to the enduring qualities of the lark
She sings at heaven’s gate. But is it unbolted? Bolted? Yes.
Which, though, is which? To which the answer cannot be yes
So reverse question. Pamela bending before the grate
Turns round rapidly to say Yes! I will meet you in Boston
At five after nine, if my Irishness is still working
And the global hamadryads, wood nymphs of my “yes.”
But what, Pamela, what does that mean? Am I a yes
To be posed in the face of a negative alternative?
Or has the sky taken away from me its ultimate guess
About how probably everything is going to be eventually terrible
Which is something we knew all along, but modified by a yes
When what we want is obvious but has a brilliantly shining trail
Of stars. Or are those asterisks? Yes. What is at the bottom
Of the most overt question? Do we die? Yes. Does that
Always come later than now? Yes.
I love your development
From the answer to a simple query to a state of peace
That has the world by the throat. Am I lying? Yes.
Are you smiling? Yes. I’ll follow you, yes? No reply.