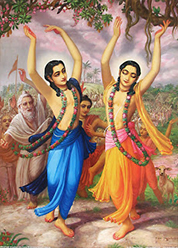 In Hinduism and Buddhism, “Bhakti” (also spelled Bhakthi; is a technical term meaning of “portion, share”, from the root bhaj- “to partake in, to receive one’s share”. It refers to religious devotion in the form of active involvement of a devotee in worship of the divine. Within monotheistic Hinduism, it is the love felt by the worshiper towards the personal God, a concept expressed in Hindu theology as Iṣṭa-devatā (also as Svayam Bhagavan in Gaudiya Vaishnavism).

Kirtan Bakti: Kirtan or kirtana is call-and-response chanting or “responsory” performed in India’s bhakti devotional traditions. A person performing kirtan is known as a kirtankar. Kirtan practice involves chanting hymns or mantras to the accompaniment of instruments such as the harmonium, tablas, the two-headed mrdanga or pakawaj drum, and karatal hand cymbals. It is a major practice in Vaisnava devotionalism, Sikhism, the Sant traditions, and some forms of Buddhism, as well as other religious groups.