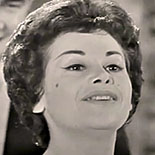 Her critically praised 1959 album All the Kings’ Songs found her interpreting the signature songs of contemporary male singers like Frank Sinatra and Nat King Cole (the “kings” of the title). In the 1960s, she opened the Playboy Club, where she often performed. After developing lupus, she managed to make a brief comeback with a 1977 album featuring Dave McKenna, and with two more albums recorded for Audiophile released posthumously. She eventually died of the disease on November 18, 1977. King’s style, influenced by Lee Wiley, Mildred Bailey and Mabel Mercer, has won her a small but devoted cult following.