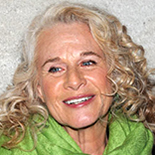 Carole King (born February 9, 1942) is an American singer and songwriter.

Her career began in the 1960s when King, along with her former husband Gerry Goffin, wrote more than two dozen chart hits for numerous artists, many of which have become standards and she has continued writing for other artists since then. She had her first number 1 hit as a songwriter in 1960 at age 18, with “Will You Love Me Tomorrow”, which she wrote with Goffin. In 1997, she co-wrote “The Reason”, which was a hit for Celine Dion.

Her success as a performer in her own right did not come until the the 1970s, when she would sing her own songs, accompanying herself on the piano, in a series of albums and concerts. After experiencing commercial disappointment with her debut album Writer, King scored her breakthrough with the album Tapestry which topped the U.S. album chart for 15 weeks in 1971 and remained on the charts for more than six years.

In 2000, Joel Whitburn, a Billboard Magazine pop music researcher, named her the most successful female songwriter of 1955–99 because she wrote or co-wrote 118 pop hits on the Billboard Hot 100.

She has won four Grammy Awards and was inducted into the Songwriters Hall of Fame and the Rock and Roll Hall of Fame for her songwriting. Carole’s album Tapestry held the record for most weeks at #1 by a female artist for more than 20 years until broken by Whitney Houston (for the soundtrack album The Bodyguard), which was itself later topped by Adele (for the album 21 in 2012).

PIERRE
Prologue:
There was once a boy named Pierre
Who only would say, I don’t care!
Read his story, my friend, for you’ll find
At the end that a suitable
Moral lies there

Arriving home at six o’clock
His parents had a dreadful shock!
They found the lion sick in bed and cried
-Pierre is surely dead!
They pulled the lion by the hair
They hit him with the folding chair
His mother asked-Where is Pierre?
The lion answered-I don’t care!
His father said-Pierre’s in there!

They rushed the lion into town
The doctor shook him up and down
And when the lion gave a roar
Pierre fell out upon the floor
He rubbed his eyes and scratched his head
And laughed because he wasn’t dead
His mother cried and held him tight
His father asked-Are you allright?
Pierre said-I am feeling fine
Please take me home, it’s half past nine

The lion said-If you would care
To climb on me, I’ll take you there
Then everyone looked at Pierre
Who shouted-Yes, indeed, I care!
The lion took them home to rest
And stayed on as a weekend guest
The moral of Pierre is: CARE!