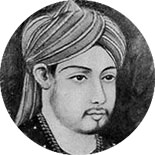 Amir was an iconic figure in the cultural history of the Indian subcontinent. A Sufi mystic and a spiritual disciple of Nizamuddin Auliya of Delhi, Amīr Khusrow was not only a notable poet but also a prolific and seminal musician. He wrote poetry primarily in Persian, but also in Hindavi. He compiled the oldest known printed dictionary (Khaliq-e-bari) in 1320 which mainly dealt with Hindvi and Persian words.

He is regarded as the “father of qawwali” (the devotional music of the Sufis in the Indian subcontinent). He is also credited with enriching Hindustani classical music by introducing Persian and Arabic elements in it, and was the originator of the khayal and tarana styles of music. The invention of the tabla is also traditionally attributed to Amīr Khusrow.

A musician and a scholar, Amir Khusrow was as prolific in tender lyrics as in highly involved prose and could easily emulate all styles of Persian poetry which had developed in medieval Persia, from Khāqānī’s forceful qasidas to Nizami’s khamsa. He used only 11 metrical schemes with 35 distinct divisions. The verse forms he has written in include Ghazal, Masnavi, Qata, Rubai, Do-Beti and Tarkibhand. His contribution to the development of the ghazal, hitherto little used in India, is particularly significant.

I have become you, and you me,
I am the body, you soul;
So that no one can say hereafter,
That you are someone, and me someone else.

Last night I dreamt you brought me wine
and poured and poured until my dreams were full,
each one watered till the tendrils grew.

And then I heard you pouring more again for two
and thought I saw my tears reflecting you….
I wasn’t sure, until I woke to find
my body bathed in wine and wrapped in vines
or was it you?

I never knew who turned my night to day
before the dawn had time for dew.

What a glow everywhere I see, Oh mother, what a glow;
I’ve found the beloved, yes I found him,
In my courtyard;
I have found my pir Nizamuddin Aulia.
I roamed around the entire world,
looking for an ideal beloved;
And finally this face has enchanted my heart.
The whole world has been opened for me,
Never seen a glow like this before.
Whenever I see now, he is with me,
Oh beloved, please dye me in yourself;
Dye me in the color of the spring, beloved;
What a glow, Oh, what a glow.