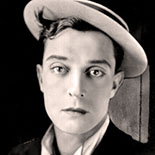 Keaton was best known for his silent films, in which his trademark was physical comedy with a consistently stoic, deadpan expression, earning him the nickname “The Great Stone Face”.

Buster Keaton (his lifelong stage name) was recognized as the seventh-greatest director by Entertainment Weekly. In 1999, the American Film Institute ranked Keaton the 21st-greatest male star. Critic Roger Ebert wrote of Keaton’s “extraordinary period from 1920 to 1929, [when] he worked without interruption on a series of films that make him, arguably, the greatest actor-director in the history of the movies.” His career declined afterward with a dispiriting loss of his artistic independence when he was hired by MGM resulting in a crippling alcoholism that ruined his family life. However, he recovered in the 1940s, remarried and revived his career to a degree as an honored comic performer for the rest of his life, earning an Academy Honorary Award in 1958.