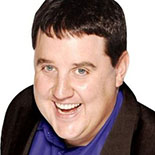 Peter John Kay (born 2 July 1973) is an English comedian and actor. His 2010-11 stand-up comedy tour was officially inaugurated into the Guinness World Records as the most successful of all time, playing to over 1.2 million people.