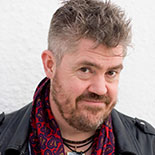 Jupitus was a team captain on BBC Two’s popular music quiz Never Mind the Buzzcocks from its inception in 1996 until its end in 2015, and also appears regularly as a guest on several other panel shows, including QI and BBC Radio 4’s I’m Sorry I Haven’t a Clue.