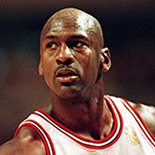 His biography on the National Basketball Association website states, “By acclamation, Michael Jordan is the greatest basketball player of all time.” Jordan was one of the most effectively marketed athletes of his generation and was considered instrumental in popularizing the NBA around the world in the 1980s and 1990s.

After a three-season career at the University of North Carolina at Chapel Hill, where he was a member of the Tar Heels’ national championship team in 1982, Jordan joined the NBA’s Chicago Bulls in 1984. He quickly emerged as a league star, entertaining crowds with his prolific scoring. His leaping ability, illustrated by performing slam dunks from the free throw line in slam dunk contests, earned him the nicknames “Air Jordan” and “His Airness”. He also gained a reputation for being one of the best defensive players in basketball.