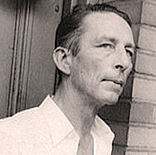 Most of Jeffers’ poetry was written in classic narrative and epic form, but today he is also known for his short verse, and considered an icon of the environmental movement.

It nearly cancels my fear of death, my dearest child said,
When I think of cremation. To rot in the earth
Is a loathsome end, but to roar up in flame—besides, I am used to it
I have flamed with love or fury so often in m life,
No wonder my body is tired, no wonder it is dying.
We had great joy of my body. Scatter the ashes.

FIRE ON THE HILLSRobinson Jeffers

The deer were bounding like blown leaves
Under the smoke in front the roaring wave of the brush-fire;
I thought of the smaller lives that were caught.
Beauty is not always lovely; the fire was beautiful, the terror
Of the deer was beautiful; and when I returned
Down the back slopes after the fire had gone by, an eagle
Was perched on the jag of a burnt pine,
Insolent and gorged, cloaked in the folded storms of his shoulders
He had come from far off for the good hunting
With fire for his beater to drive the game; the sky was merciless
Blue, and the hills merciless black,
The somber-feathered great bird sleepily merciless between them.
I thought, painfully, but the whole mind,
The destruction that brings an eagle from heaven is better than mercy.