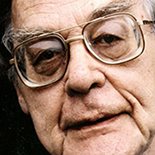 Jacobsen’s career as a writer spanned more than fifty years. He is one of Scandinavia’s most distinguished poets, who launched poetic modernism in Norway with his first book, Jord og jern (Earth and Iron) in 1933. Jacobsen’s work has been translated into over twenty languages. The central theme in his work is the balance between nature and technology—he was called “the Green Poet” in Norwegian literature.

Jacobsen often expressed ironically his doubts about technology, and praised the blessings of little joys.

Evening and planet
pour their light onto the other side
(out through windows and over hillsides)
so the grey dawn can come to the rice fields
and light may fall on the dead man’s breast,
because we are unfeeling
or thoughtless. For us darkness is near
and now the light searches
over fingers lips eyelids
of those who sleep on the streets in cities of the forsaken
and of the girl with the tired smile
who stands and lets the oxen drink
before thatched huts here
under Mount Djema Oka
which in her language means The Tearless.

Whether it’s this way or that
here we have used up our day
and must content ourselves with the Coke ads and the moon
and with darkness that extends toward the ends of the Earth.

It always comes to the stones first
— light, as though it revolved around blindness.

First to the stones, like a coldness,
rebirth, a cry
without sound.

Night dissolves in fragments,
gradually as each
gravestone reappears,
gutters, rooftops,
but dimly, as if through water
— someone forces his way in to us
and tries to see what no one has seen before,
his forehead meets a wall,
a foot stumbles over rocks.

Maybe your heart, that the night won’t give rest.
Your death, but something in your dream
has to leave first.