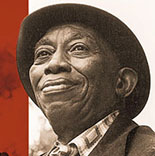 Raised in Avalon, Mississippi, Hurt taught himself how to play the guitar around age nine. Singing to a melodious finger-picked accompaniment, he began to play local dances and parties while working as a sharecropper. He first recorded for Okeh Records in 1928, but these were commercial failures. Hurt then drifted out of the recording scene and continued to work as a farmer. Tom Hoskins, a blues enthusiast, located Hurt in 1963 and convinced him to relocate to Washington, D.C. where he was recorded by the Library of Congress in 1964. This helped further the American folk music revival, which had led to the rediscovery of many other bluesmen of Hurt’s era. Hurt entered the university and coffeehouse concert circuit with other Delta blues musicians brought out of retirement. As well as playing concerts, he recorded several albums for Vanguard Records.