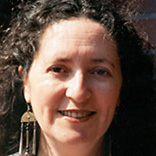 Her most recent poetry collection is Woman in the Painting (Autumn House Press, 2006). Her work appeared in Poetry, The Georgia Review, The Gettysburg Review, New Letters, FIELD, Five Points, Shenandoah, and Creative Nonfiction.

It’s nothing, really, just a kind of trick I use
to keep them. I look up from their bodies

over which neither of us has any control.
I look up from their bodies and glance

toward a window, if there is a window,
or a closet door or a calendar on the wall, perhaps

a candle on the bedside table with its rare field flame.
I there’s a painting above the bed, I bed sure it’s safe

before we even begin to undress or lie down
to undress one another. Once

it was one of those portraits of Jesus
naked and bleeding, which ruined everything.

I’m all there when I’m there. Yet sometimes, I’ve learned,
it’s better to lift them out of themselves by giving

a little bit less. I don’t mean to be cruel,
cutting them off from my pure attention. I only want

the deepest they’ll give me, the thing you can’t ask for —
they don’t know where it is themselves. I think

of Valentino who was forced to use only his eyes to speak
and his body, the sound of his voice kept irretrievably

from us, that incomplete circle that wanted finishing,
and we, of course, supplied the best.

That’s it, really. Leaving something necessary
out that they’ll fill in. Something small, of course,

but important, something at first you don’t withhold
so they’ll notice right away when you do.

the ten things wrong? An upside-down
clock, say, or a dog in a tree?

It’s taken me years to learn this, and it works.
A woman will nest herself for as long as I want her.

She gives me more and more of everything, tries
to fill my gaps, plug holes in my conversation.

When she finally tires of her own failures, and leaves,
it never hurts. I always have at least her sympathies.

and her longing. There are so many beautiful women
lighting this world. It’s the only way I’ve found

is what he said but as he said it
swayed a little in my direction,
the hair on his neck so like
my son’s, barely there, but golden
if you bothered looking.

He was looking at me anyway,
no matter what he said,
a benefit of having spoken
his excuses so I’d excuse
anything he did thereafter.

And afterwards I thought
how easily he’d escaped
whatever I may have taken
from that look, that he wanted
it to be my invention, the way

I used to pull my stockings up
pretending not to notice Richie
watching, when I was nineteen
and wanted secretly my first time
to happen already, but wanted it

to be his doing, this undoing
I longed for desperately,
the way this man wants
some blameless ruin.