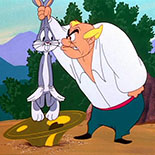 In addition to including the homophones “hair” and “hare”, the title is also a pun on “longhairs”, a characterization of classical music lovers. Nicolai Shutorov provides the singing voice of Giovanni Jones.

According to Daniel Goldmark, the first two minutes of the cartoon establish a struggle between classical music and popular music. Giovanni acts as if protecting the world of “good” music from the ignorant masses which Bugs represents. The folk melodies which Bugs sings are features as infectious and treated as disease by Giovanni, acting as a representative of the musical establishment. Each time that Giovanni finds himself singing to one of Bugs’ songs, his first reaction is shock. A shock followed by fury. He rages because he wastes his voice on less refined music. Goldmark finds similarities with The Band Concert (1935), where Donald Duck insists on playing Turkey in the Straw and infuriates Mickey Mouse. 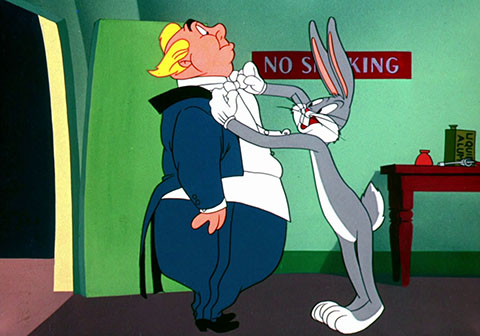 Bugs is established as an anti-aesthete first by his initial choice of musical organ, the banjo. Secondly by placing his singing in a backwoods setting, as opposed to Giovanni’s modern house. Thirdly, he sings from memory while Giovanni uses sheet music. He is also implied to be an untrained musician, contrasting with the trained Giovanni. A further contrast is implied through the geographic origin of their songs. Bugs sings American popular songs, while Giovanni’ repertoire is Western European in origin.

By assuming the position of the conductor, Bugs places himself at the top of the musical hierarchy. He forces Giovanni into an improvised vocalization which spans his entire range and an exercise of all his technical skills. He then forces Giovanni to hold a painful long high G, which brings the Hollywood Bowl crashing down on the singer. Bugs assumes the stereotypical attributes of famous conductors, displaying majesty, arrogance, and tyrannical behavior. He also follows the dress code of the concert hall by wearing white tie and tails. Formal wear which is still associated with performers.