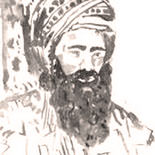 Halevi was born in Spain, either in Toledo or Tudela, in 1075 or 1086, and died shortly after arriving in Israel in 1141. Halevi is considered one of the greatest Hebrew poets, celebrated both for his religious and secular poems, many of which appear in present-day liturgy. His greatest philosophical work was The Kuzari.

HAS A NEW FLOOD DROWNED THE LAND?
Yehuda Halevy

Has a new Flood drowned the land
And left no patch of dry ground,
Neither bird, beast, nor man?
Has nothing remained?
A strip of bare sand
Would be balm for the mind;
The dreariest plain,
A pleasure to scan
But all that is seen
Is a ship and the span
Of the sea and the sky, and Leviathan
As he churns up the brine,
Which grips the ship as the hand
Of a thief grips his find.
Let it foam My heart bounds
As I near the Lord’s shrine