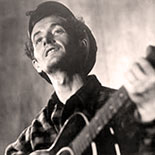 Woody’s musical legacy includes hundreds of political, traditional and children’s songs, ballads and improvised works. He frequently performed with the slogan This Machine Kills Fascists displayed on his guitar. His best-known song is “This Land Is Your Land.” Many of his recorded songs are archived in the Library of Congress.

Many of his songs are about his experiences in the Dust Bowl era during the Great Depression when Guthrie traveled with migrant workers from Oklahoma to California and learned their traditional folk and blues songs, earning him the nickname the “Dust Bowl Troubadour.” Throughout his life Guthrie was associated with United States Communist groups, though he was seemingly not a member of any.

Guthrie was married three times and fathered eight children, including American folk musician Arlo Guthrie. Guthrie died from complications of Huntington’s disease, a progressive genetic neurological disorder. During his later years, in spite of his illness, Guthrie served as a figurehead in the folk movement, providing inspiration to a generation of new folk musicians, including mentor relationships with Ramblin’ Jack Elliott and Bob Dylan.

THIS LAND IS YOUR LAND
Lyrics by Woody Guthrie

This land is your land and this land is my land,
From California to the New York Island,
From the redwood forest to the gulf stream waters,
This land was made for you and me.

As I went a walkin’ that ribbon of highway,
An’ I saw above me that endless skyway.
I saw below me, that golden valley,
This land was made for you and me.

I roamed and rambled and I follered my footsteps,
To the sparklin’ sands of her diamond deserts,
All around me, a voice was a sounding,
This land was made for you and me.

There was a big high wall there that tried to stop me,
Sign was painted said, “Private Property”
But on the back side it didn’t say nothing,
This land was made for you and me.

When the sun comes shining, then I was strolling,
And the wheat fields waving, and the dust clouds rolling,
The voice was chanting as the fog was lifting,
This land was made for you and me.

This land is your land and this land is my land,
From California to the New York Island,
From redwood forest to the gulf stream waters,
This land was made for you and me.