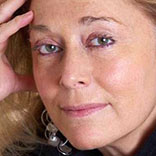 The Poetry Foundation called Graham “one of the most celebrated poets of the American post-war generation. She replaced poet Seamus Heaney as Boylston Professor at Harvard, becoming the first woman to be appointed to this position. She won the Pulitzer Prize for Poetry (1996) for The Dream of the Unified Field: Selected Poems 1974-1994 and was chancellor of the Academy of American Poets from 1997 to 2003.

I watched them once, at dusk, on television, run,
in our motel room half-way through
Nebraska, quick, glittering, past beauty, past
the importance of beauty.,
archaic,
not even hungry, not even endangered, driving deeper and deeper
into less. They leapt up falls, ladders,
and rock, tearing and leaping, a gold river,
and a blue river traveling
in opposite directions.
They would not stop, resolution of will
and helplessness, as the eye
is helpless
when the image forms itself, upside-down, backward,
driving up into
the mind, and the world
unfastens itself
from the deep ocean of the given. . .Justice, aspen
leaves, mother attempting
suicide, the white night-flying moth
the ants dismantled bit by bit and carried in
right through the crack
in my wall. . . .How helpless
the still pool is,
upstream,
awaiting the gold blade
of their hurry. Once, indoors, a child,
I watched, at noon, through slatted wooden blinds,
a man and woman, naked, eyes closed,
climb onto each other,
on the terrace floor,
and ride–two gold currents
wrapping round and round each other, fastening,
unfastening. I hardly knew
what I saw. Whatever shadow there was in that world
it was the one each cast
onto the other,
the thin black seam
they seemed to be trying to work away
between them. I held my breath.
as far as I could tell, the work they did
with sweat and light
was good. I’d say
they traveled far in opposite
directions. What is the light
at the end of the day, deep, reddish-gold, bathing the walls,
the corridors, light that is no longer light, no longer clarifies,
illuminates, antique, freed from the body of
that air that carries it. What is it
for the space of time
where it is useless, merely
beautiful? When they were done, they made a distance
one from the other
and slept, outstretched,
on the warm tile
of the terrace floor,
smiling, faces pressed against the stone.