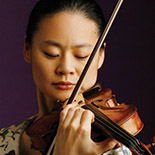 Goto made her debut at the age of 11 in a special last-minute addition to the program during a set of concerts including a special New Year’s Eve Gala by the New York Philharmonic under Zubin Mehta. When she was 21, she established her first not-for-profit organization Midori and Friends to bring music education and opportunities to children in New York City and Japan. In 2007, she was appointed as a UN Messenger of Peace.