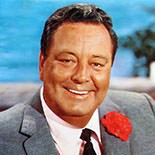 Gleason was known for his brash visual and verbal comedy style, exemplified by his character Ralph Kramden in The Honeymooners. Among his notable film roles were Minnesota Fats in the 1961 drama The Hustler (starring Paul Newman) and Buford T. Justice in the Smokey and the Bandit series.