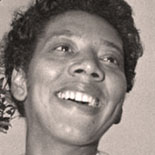 Althea Gibson (August 25, 1927 – September 28, 2003) was an American tennis player and professional golfer, and the first black athlete of either gender to cross the color line of international tennis.

In 1956 she became the first person of color to win a Grand Slam title (the French Open). The following year she won both Wimbledon and the U.S. Nationals (precursor of the U.S. Open), then won both again in 1958, and was voted Female Athlete of the Year by the Associated Press in both years. In all she won 11 Grand Slam tournaments, including six doubles titles, and was inducted into the International Tennis Hall of Fame and the International Women’s Sports Hall of Fame. “She is one of the greatest players who ever lived,” said Robert Ryland, a tennis contemporary and former coach of Venus and Serena Williams. “Martina couldn’t touch her. I think she’d beat the Williams sisters.” In the early 1960s she also became the first black player to compete on the women’s professional golf tour.

At a time when racism and prejudice were widespread in sports and in society, Gibson was often compared to Jackie Robinson. “Her road to success was a challenging one,” said Billie Jean King, “but I never saw her back down.” “To anyone, she was an inspiration, because of what she was able to do at a time when it was enormously difficult to play tennis at all if you were black,” said former New York City Mayor David Dinkins. “I am honored to have followed in such great footsteps,” wrote Venus Williams. “Her accomplishments set the stage for my success, and through players like myself and Serena and many others to come, her legacy will live on.”