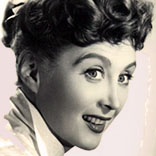 She originally performed on Broadway before being signed to a film contract with Metro-Goldwyn-Mayer. While there, she appeared in several musical films before returning to Broadway and making guest appearances on several television series.

Later, she became known for the roles she played in two prominent 1970s sitcoms: Archie Bunker’s liberal neighbor Irene Lorenzo in All in the Family and landlady Edna Babish in Laverne & Shirley.

In later years, Garrett appeared in television series such as Grey’s Anatomy, Boston Public and Becker as well as in several Broadway plays and revivals.