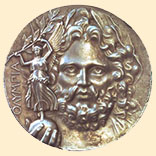 The 1896 Summer Olympics, officially known as the Games of the I Olympiad, was a multi-sport event held in Athens, Greece, from April 6 to 15, 1896.

It was the first international Olympic Games held in the Modern era. Because Ancient Greece was the birthplace of the Olympic Games, Athens was considered to be an appropriate choice to stage the inaugural modern Games. It was unanimously chosen as the host city during a congress organized by Pierre de Coubertin, a French pedagogue and historian, in Paris, on June 23, 1894. The International Olympic Committee was also instituted during this congress.

Despite many obstacles and setbacks, the 1896 Olympics were regarded as a great success. The Games had the largest international participation of any sporting event to that date. The Panathinaiko Stadium, the only Olympic stadium used in the 1800s, overflowed with the largest crowd ever to watch a sporting event. The highlight for the Greeks was the marathon victory by their compatriot Spyridon Louis. The most successful competitor was German wrestler and gymnast Carl Schuhmann, who won four events.

After the Games, Coubertin and the IOC were petitioned by several prominent figures, including Greece’s King George and some of the American competitors in Athens, to hold all the following Games in Athens. However, the 1900 Summer Olympics were already planned for Paris and, except for the Intercalated Games of 1906, the Olympics did not return to Greece until the 2004 Summer Olympics, some 108 years later.