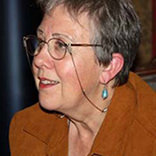 Tess Gallagher, a poet, essayist, novelist, and playwright, was born in July 21, 1943 in Port Angeles, Washington.

Her first collection of poems, Instructions to the Double, won the 1976 Elliston Book Award for “best book of poetry published by a small press”. In 1984, she published the collection Willingly, which consists of poems written to and about her third husband, author Raymond Carver, who died in 1988. Other collections include Dear Ghosts (Graywolf Press, 2006), My Black Horse: New and Selected Poems (1995), Owl-Spirit Dwelling (1994) and Moon Crossing Bridge (1992).

About Gallagher’s work, the poet Hayden Carruth wrote, “Gallagher’s poems, beyond their delicacy of language, have a delicacy of perception, and the capacity to see oneself objectively as another person doing the things one really does, with clear affection and natural concern.”

Her honors include a fellowship from the Guggenheim Foundation, two National Endowment of the Arts Awards, and the Maxine Cushing Gray Foundation Award.

She was cleaning—there is always
that to do—when she found,
at the top of the closet, his old
silk vest. She called me
to look at it, unrolling it carefully
like something live
might fall out. Then we spread it
on the kitchen table and smoothed
the wrinkles down, making our hands
heavy until its shape against Formica
came back and the little tips
that would have pointed to his pockets
lay flat. The buttons were all there.
I held my arms out and she
looped the wide armholes over
them. “That’s one thing I never
wanted to be,” she said, “a man.”
I went into the bathroom to see
how I looked in the sheen and
sadness. Wind chimes
off-key in the alcove. Then her
crying so I stood back in the sink-light
where the porcelain had been staring. Time
to go to her, I thought, with that
other mind, and stood still.

Not while, but long after he had told me,
I thought of him, washing his mother, his
bending over the bed and taking back
the covers. There was a basin of water
and he dipped a washrag in and
out of the basin, the rag
dripping a little onto the sheet as he
turned from the bedside to the nightstand
and back, there being no place

on her body he shouldn’t touch because
he had to and she helped him, moving
the little she could, lifting so he could
wipe under her arms, a dipping motion
in the hollow. Then working up from
the feet, around the ankles, over the
knees. And this last, opening
her thighs and running the rag firmly
and with the cleaning thought
up through her crotch, between the lips,
over the V of thin hairs—

as though he were a mother
who had the excuse of cleaning to touch
with love and indifference,
the secret parts of her child, to graze
the sleepy sexlesness in its waiting
to find what to do for the sake
of the body, for the sake of what only
the body can do for itself.

So his hand, softly at the place
of his birth-light. And she, eyes deepened
and closed in the dim room.
And because he told me her death as
important to his being with her,
I could love him another way. Not
of the body alone, or of its making,
but carried in the white spires of trembling
until what spirit, what breath we were
was shaken from us. Small then,
the word holy.

He turned her on her stomach
and washed the blades of her shoulders, the
small of her back. “That’s good,” she said,
“that’s enough.”
On our lips that morning, the tart juice
of the mothers, so strong in remembrance, no
asking, no giving, and what you said, this
being the end of our loving, so as not to hurt
the closer one to you, make me look
to see what was left of us
with our sex taken away. “Tell me,” I said,
“something I can’t forget.” Then the story of
your mother, and when you finished
I said, “That’s good, that’s enough.”