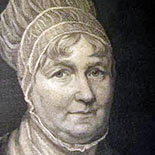 She has sometimes been referred to as the “angel of prisons”.

Fry was a major driving force behind new legislation to make the treatment of prisoners more humane, and she was supported in her efforts by the reigning monarch. Since 2001, she has been depicted on the Bank of England £5 note.