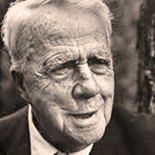 He is highly regarded for his realistic depictions of rural life and his command of American colloquial speech. His work frequently employed settings from rural life in New England in the early twentieth century, using them to examine complex social and philosophical themes. One of the most popular and critically respected American poets of his generation, Frost was honored frequently during his lifetime, receiving four Pulitzer Prizes for Poetry.

NEVER AGAIN WOULD BIRDS’ SONG BE THE SAME
Robert Frost

He would declare himself believe
That the birds there in all the garden round
From having heard the daylong voice of Eve
He added to their own an oversound,
Her tone of meaning but without the words.
Admittedly an eloquence so soft
Could only have had an influence on birds
When call or laughter carried it aloft.
Be that as may be, she was in their song.
Moreover her voice upon their voices crossed
Had now persisted in the woods so long
That probably it never would be lost.
Never again would birds’ song be the same.
And to do that to birds was why she came.

STOPPING BY WOODS ON A SNOWY EVENING
Robert Frost

Whose woods these are I think I know.
His house is in the village though;
He will not see me stopping here
To watch his woods fill up with snow.

My little horse must think it queer
To stop without a farmhouse near
Between the woods and frozen lake
The darkest evening of the year.

He gives his harness bells a shake
To ask if there is some mistake.
The only other sound’s the sweep
Of easy wind and downy flake.