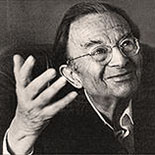 Erich Seligmann Fromm (March 23, 1900 – March 18, 1980) was a German social psychologist, psychoanalyst, sociologist, humanistic philosopher, and democratic socialist. He was associated with what became known as the Frankfurt School of critical theory.

Beginning with his first seminal work of 1941, Escape from Freedom (known in Britain as Fear of Freedom), Fromm’s writings were notable as much for their social and political commentary as for their philosophical and psychological underpinnings. Indeed, Escape from Freedom is viewed as one of the founding works of political psychology. His second important work, Man for Himself: An Inquiry into the Psychology of Ethics, first published in 1947, continued and enriched the ideas of Escape from Freedom. Taken together, these books outlined Fromm’s theory of human character, which was a natural outgrowth of Fromm’s theory of human nature. Fromm’s most popular book was The Art of Loving, an international bestseller first published in 1956, which recapitulated and complemented the theoretical principles of human nature found in Escape from Freedom and Man for Himself—principles which were revisited in many of Fromm’s other major works.

Central to Fromm’s world view was his interpretation of the Talmud and Hasidism. He began studying Talmud as a young man under Rabbi J. Horowitz and later under Rabbi Salman Baruch Rabinkow, a Chabad Hasid, while working towards his doctorate in sociology at the University of Heidelberg, Fromm studied the Tanya by the founder of Chabad, Rabbi Shneur Zalman of Liadi. Fromm also studied under Nehemia Nobel and Ludwig Krause while studying in Frankfurt. Fromm’s grandfather and two great grandfathers on his father’s side were rabbis, and a great uncle on his mother’s side was a noted Talmudic scholar. However, Fromm turned away from orthodox Judaism in 1926, towards secular interpretations of scriptural ideals.

The cornerstone of Fromm’s humanistic philosophy is his interpretation of the biblical story of Adam and Eve’s exile from the Garden of Eden. Drawing on his knowledge of the Talmud, Fromm pointed out that being able to distinguish between good and evil is generally considered to be a virtue, and that biblical scholars generally consider Adam and Eve to have sinned by disobeying God and eating from the Tree of Knowledge. However, departing from traditional religious orthodoxy on this, Fromm extolled the virtues of humans taking independent action and using reason to establish moral values rather than adhering to authoritarian moral values.