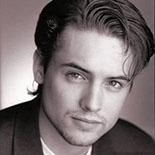 He is best known for his comedic roles, most notably the underachieving elder brother Eric Matthews on the long-running TV sitcom Boy Meets World from 1993 to 2000.  More recently, he has voiced a number of animated characters such as Terry McGinnis/Batman, the titular character of Batman Beyond, and Ron Stoppable of Kim Possible. He does the voice of Deadpool in Ultimate Spider-Man. He also did the voices of Doyle in The Secret Saturdays, Lion-O in the rebooted ThunderCats series, and Blue Beetle (Jaime Reyes) on Batman: The Brave and the Bold. One of his most recent roles has been the speaking voice of Bumblebee in the final episode of Transformers: Prime and the movie Transformers Prime Beast Hunters: Predacons Rising and in the sequel series Transformers: Robots in Disguise.