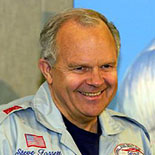 Fossett was the first person to fly solo nonstop around the world in a balloon. He made his fortune in the financial services industry and was best known for many world records, including five nonstop circumnavigations of the Earth: as a long-distance solo balloonist, as a sailor, and as a solo flight fixed-wing aircraft pilot.

A fellow of the Royal Geographical Society and the Explorers Club, Fossett set 116 records in five different sports, 60 of which still stood when he disappeared.

On September 3, 2007 Fossett was reported missing after the plane he was flying over the Great Basin Desert in Nevada failed to return. Despite a month of searches by the Civil Air Patrol (CAP) and others, Fossett could not be found and the search by CAP was called off on October 2, 2007. Privately funded and privately directed search efforts continued, but after a request from Fossett’s wife he was declared legally dead on February 15, 2008.

On September 29, 2008, a hiker found Fossett’s identification cards in the Sierra Nevada Mountains in California and the crash site was discovered on October 1, 2008, 65 miles (100 km) due south from Flying-M Ranch where he took off, and 5.3 miles (8.5 km) due west (282 degrees) of Mammoth Mountain Ski Area’s base operations. His remains were not initially found. On November 3, 2008, tests conducted on two bones recovered about one-half mile (0.8 km) from the site of the crash produced a match to Fossett’s DNA.