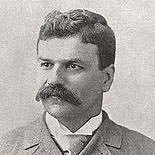 Sam Walter Foss (June 19, 1858 – February 26, 1911) was an American librarian and poet whose works included The House by the Side of the Road and The Coming American.

“The proper way for a man to pray”
said Deacon Lemuel Keyes,
“and the only proper attitude
is down upon his knees.”

“Nay, I should say the way to pray,”
said Reverend Dr. Wise
“is standing straight with outsrecthed arms
and rapt and upturned eyes.”

“Oh, no, no, no.” said Elder Snow
“Such posture is too proud
A man should pray with eyes fast closed
and head contritely bowed.”

“It seems to me his hands should be
astutely clasped in front.
With both thumbs a pointing toward the ground.”
Said Reverend Hunt.

“Las’ year I fell in Hodgkins well
head first,” said Cyrus Brown,
“With both my heels a-stikin’ up,
my head a-p’inting down,
An’ I made a prayer right there an’ then;
Best prayer I ever said;
The prayingest prayer I ever prayed,
A-standin on my head.”

The trumpets were calling me over the hill,
And I was a boy and knew nothing of men;
But they filled all the vale with their clangorous trill,
And flooded the gloom of the glen.

The trumpets were calling me over the Range,
And I was a youth and was strong for the strife;
And I was full fain for the new and the strange,
And mad for the tumult of life.

And I heard the loud trumpets that blew for the fray,
In the spell of their magic and madness was dumb;
And I said, “I will follow by night and by day,
The trumpets are calling — I come.”

The trumpets were calling and I was a man,
And had faced the stern world and grown strong;
And the trumpets mere calling far off, and I ran
Toward the blare of their mystical song.

And they led me o’er mountains, ‘neath alien skies,
All else but their music was dumb;
And I ran till I fell, and slept but to rise,
Lo, the trumpets are calling — I come.

And lo, a strange boatman is here with his bark,
And he takes me and rows away, silent and dumb;
But my trumpets! my trumpets! they peal through the dark,
The trumpets are calling — I come.