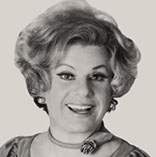 Fields was born Sophie Feldman in Hartford, Connecticut. She started singing in Boston clubs while still in high school, taking the stage name of Totie Fields. The name “Totie” was a childhood nickname, a baby-talk pronunciation of the name “Sophie”.

Fields gained fame during the 1960s and 1970s. Ed Sullivan gave Fields her first big break when he booked her on his show after seeing her perform at the Copacabana in New York. She made multiple appearances on The Ed Sullivan Show, The Mike Douglas Show, and The Merv Griffin Show, as well as a fifth season episode of Here’s Lucy starring Lucille Ball.

In 1978, during the last year of her life, Fields was voted “Entertainer of the Year” and “Female Comedy Star of the Year” by the American Guild of Variety Artists.