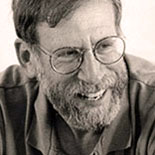 Alan Feldman, American poet, born March 16, 1945. Alan’s latest book is State College 101: The Story of a Freshman Writing Class. His work has appeared in The Atlantic Monthly, The New Yorker, and The Kenyon Review, among many other magazines, and included in The Best American Poetry 2001. The National Endowment for the Arts and the Massachusetts Artists Foundation have awarded him fellowships in poetry.

A MAN AND A WOMAN
Alan Feldman