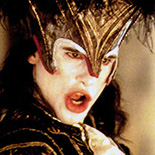 Farinelli (January 24, 1705 – September 16, 1782), was the stage name of Carlo Maria Michelangelo Nicola Broschi, celebrated Italian castrato singer of the 18th century and one of the greatest singers in the history of opera.

Farinelli is widely regarded as the greatest, most accomplished and most respected opera singer of the “castrato” era, which lasted from the early 1600s into the early 1800s, and while there were a vast number of such singers during this period, originating especially from the Neapolitan School of such composers as Nicola Porpora, Alessandro Scarlatti and Francesco Durante, only a handful of his rivals could approach his skill as a singer, and perhaps none his qualities as a human being.