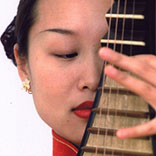 Described in the media as the “empress of pipa” (L’actualité), “divine mediator” (World), “the greatest ambassadress of the art of the pipa” (La presse), Liu Fang is known as “possessing virtuoso technique, grace and a unique empathy toward the music she plays – whether it is a traditional and folk tune or a modern Western composition” (All Music Guide).