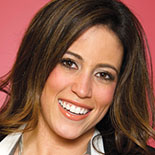 Ettinger is notable for portraying Obama Girl in Barely Political’s June 2007 Internet video “I Got a Crush… on Obama”, in which she expressed her admiration of then-U.S. Senator Barack Obama. The video led to numerous sketch comedy appearances and interviews, including Saturday Night Live, Geraldo at Large, The O’Reilly Factor, and Hannity.