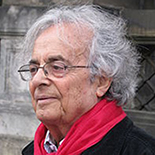 Ali Ahmad Said Esber (born January 1, 1930), also known by the pen name Adonis or Adunis is a Syrian poet, essayist, and translator. He has written more than twenty books and volumes of poetry in the Arabic language as well as translated several works from French.

We travel upon the Ark, in mud and rain,
Our oars promises from God.
We live—and the rest of Humanity dies.
We travel upon the waves, fastening
Our lives to the ropes of corpses filling the skies.
But between Heaven and us is an opening,
A porthole for a supplication.

“Why, Lord, have you saved us alone
From among all the peoples and creatures?
And where are you casting us now?
To your other Land, to our First Home?
Into the leaves of Death, into the wind of Life?
In us, in our arteries, flows a fear of the Sun.
We despair of the Light.
We despair, Lord, of a tomorrow
In which to start Life anew.

If only we were not that seedling of Creation,
Of Earth and its generations,
If only we had remained simple Clay or Ember,
Or something in between.
Then we would not have to see
This World, its Lord, and its Hell, twice over.”

If time started anew,
and waters submerged the face of life,
and the earth convulsed and that god
rushed to me, beseeching, Noah, save the living!”
I would not concern myself with his request.
I would travel upon my ark, removing
clay and pebbles from the eyes of the dead.
I would open the depths of their being to the flood,
and whisper in their veins
that we have returned from the wilderness,
that we have emerged from the cave,
that we have changed the sky of years,
that we sail without giving in to our fears—
that we do not heed the word of that god.
Our appointment is with death.
Our shores are a familiar and pleasing despair,
a gelid sea of iron water that we ford
to its very end, undeterred,
heedless of that god and his word,
longing for a different, a new, lord.

Bells on our eyelashes
and the death throes of words,
and I among fields of speech,
a knight on a horse made of dirt.
My lungs are my poetry, my eyes a book,
and I, under the skin of words,
on the beaming banks of foam,
a poet who sang  and died
leaving this singed elegy
before the faces of poets,
for birds at the edge of sky.