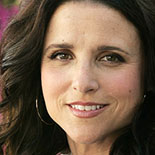 Louis-Dreyfus broke into comedy as a performer in The Practical Theater Company in Chicago, which led to her casting in the sketch show Saturday Night Live from 1982 to 1985. Her breakthrough came in 1990 with a nine-season run playing Elaine Benes on Seinfeld, one of the most critically and commercially successful sitcoms of all time. Other notable television roles include Christine Campbell in The New Adventures of Old Christine which had a five-season run on CBS, and her role as Selina Meyer in Veep, which has recently been renewed by HBO for a fifth season.