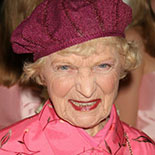 Ellen portrayed feisty old ladies and may be best known as the rapping grandmother in The Wedding Singer (1998). Dow’s other film roles include the elderly lady who “outs” her grandson in Wedding Crashers, Disco Dottie in 54, the recipient of Christopher Lloyd’s character’s slapstick in Radioland Murders and a choir member in Sister Act.