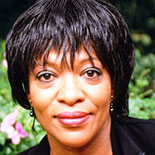 From 1993 to 1995 she served as Poet Laureate Consultant in Poetry to the Library of Congress. She is the first African American to have been appointed since the position was created by an act of Congress in 1986 from the previous “consultant in poetry” position (1937–86).

Dove also received an appointment as “special consultant in poetry” for the Library of Congress’s bicentennial year from 1999 to 2000. Dove is the second African American to receive the Pulitzer Prize for Poetry, in 1987, and she served as the Poet Laureate of Virginia from 2004 to 2006.

It’s neither red
nor sweet.
It doesn’t melt
or turn over,
break or harden,
so it can’t feel
pain,
yearning,
regret.

It doesn’t have
a tip to spin on,
it isn’t even
shapely—
just a thick clutch
of muscle,
lopsided,
mute. Still,
I feel it inside
its cage sounding
a dull tattoo:
I want, I want—
but I can’t open it:
there’s no key.
I can’t wear it
on my sleeve,
or tell you from
the bottom of it
how I feel. Here,
it’s all yours, now—
but you’ll have
to take me,
too.

I love the hour before takeoff,
that stretch of no time, no home
but the gray vinyl seats linked like
unfolding paper dolls. Soon we shall
be summoned to the gate, soon enough
there’ll be the clumsy procedure of row numbers
and perforated stubs—but for now
I can look at these ragtag nuclear families
with their cooing and bickering
or the heeled bachelorette trying
to ignore a baby’s wail and the baby’s
exhausted mother waiting to be called up early
while the athlete, one monstrous hand
asleep on his duffel bag, listens,
perched like a seal trained for the plunge.
Even the lone executive
who has wandered this far into summer
with his lasered itinerary, briefcase
knocking his knees—even he
has worked for the pleasure of bearing
no more than a scrap of himself
into this hall. He’ll dine out, she’ll sleep late,
they’ll let the sun burn them happy all morning
—a little hope, a little whimsy
before the loudspeaker blurts
and we leap up to become
Flight 828, now boarding at Gate 17.