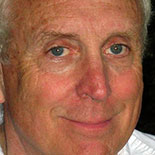 A cry was heard among the trees,
not a man’s, something deeper.
The forest extended up one side
the mountain and down the other.
None wanted to ask what had made
the cry. A bird, one wanted to say,
although he knew it wasn’t a bird.
The sun climbed to the mountaintop,
and slid back down the other side.
The black treetops against the sky
were like teeth on a saw. They waited
for it to come a second time. It’s lost,
one said. Each thought of being lost
and all the years that stretched behind.
Where had wrong turns been made?
Soon the cry came again. Closer now.