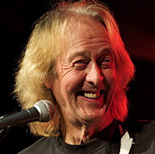 Spencer David Nelson Davis (born July 17, 1939) is a British musician and multi-instrumentalist, and the founder of the 1960s rock band The Spencer Davis Group.

Davis dropped the E in Davies and became Davis because in England and in the US his last name was pronounced “Daveys” and not Davis as in the Welsh pronunciation.