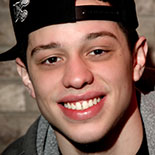 Pete Davidson (born November 16, 1993) is an American actor and comedian. He is a featured player on Saturday Night Live, the youngest member of the current cast, and the first SNL cast member to be born in the 1990s.