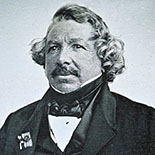 Louis-Jacques-Mandé Daguerre (November 18, 1787 – July 10, 1851) was a French artist and photographer, recognized for his invention of the daguerreotype process of photography.

He became known as one of the fathers of photography. Though he is most famous for his contributions to photography, he was also an accomplished painter and a developer of the diorama theater.

In 1829, Daguerre partnered with Nicéphore Niépce, an inventor who had produced the world’s first heliograph in 1822 and the first permanent camera photograph four years later. Niépce died suddenly in 1833, but Daguerre continued experimenting, and evolved the process which would subsequently be known as the daguerreotype.

After efforts to interest private investors proved fruitless, Daguerre went public with his invention in 1839. At a joint meeting of the French Academy of Sciences and the Académie des Beaux Arts on January 7 of that year, the invention was announced and described in general terms, but all specific details were withheld. Under assurances of strict confidentiality, Daguerre explained and demonstrated the process only to the Academy’s perpetual secretary François Arago, who proved to be an invaluable advocate.

Members of the Academy and other select individuals were allowed to examine specimens at Daguerre’s studio. The images were enthusiastically praised as nearly miraculous, and news of the daguerreotype quickly spread. Arrangements were made for Daguerre’s rights to be acquired by the French Government in exchange for lifetime pensions for himself and Niépce’s son Isidore; then, on August 19, 1839, the French Government presented the invention as a gift from France “free to the world”, and complete working instructions were published. In 1939, he was elected to the National Academy of Design as an Honorary Academician.