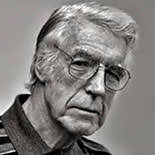 Born in Wallasey,Cheshire, he became best known for directing many comedies produced at Ealing Studios and had a 40-year career editing and directing many films and television programs.