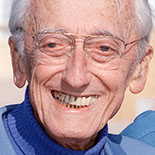 Jacques-Yves Cousteau, known as Jacques Cousteau; June 11, 1910 – June 25, 1997) was a French naval officer, explorer, conservationist, filmmaker, innovator, scientist, photographer, author and researcher who studied the sea and all forms of life in water. He co-developed the Aqua-Lung, pioneered marine conservation and was a member of the Académie française.

Cousteau described his underwater world research in series of books, perhaps most successful being his first book, The Silent World: A Story of Undersea Discovery and Adventure, published in 1953. Cousteau also directed films, most notably the documentary adaptation of the book, The Silent World, which won Palme d’or at 1956 Cannes Film Festival. He remained the only person winning Palme d’Or for documentary film, until Michael Moore won the award in 2004 for Fahrenheit 9/11.

During the 1940s, Cousteau is credited with improving the aqua-lung design which gave birth to the open-circuit scuba technology used today. According to his first book, The Silent World: A Story of Undersea Discovery and Adventure (1953), Cousteau started diving with Fernez goggles in 1936, and in 1939 used the self-contained underwater breathing apparatus invented in 1926 by Commander Yves le Prieur. Cousteau was not satisfied with the length of time he could spend underwater with the Le Prieur apparatus so he improved it to extend underwater duration by adding a demand regulator, invented in 1942 by Émile Gagnan. In 1943 Cousteau tried out the first prototype aqua-lung which finally made extended underwater exploration possible.