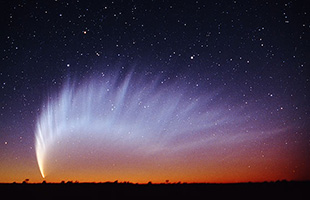 Comet McNaught, also known as the Great Comet of 2007 and given the designation C/2006 P1, is a non-periodic comet discovered on August 7, 2006 by British-Australian astronomer Robert H. McNaught using the Uppsala Southern Schmidt Telescope. It was the brightest comet in over 40 years, and was easily visible to the naked eye for observers in the Southern Hemisphere in January and February 2007.

With an estimated peak magnitude of −5.5, the comet was the second brightest since 1935. Around perihelion on January 12, it was visible worldwide in broad daylight. Its tail measured an estimated 35 degrees in length at its peak.